HAJIME MIZUTANI
Hajime Mizutani is Japanese artist and site-specific monochrome drawings form the basis of his artistic practice. His work examines expression: the act of expression, what it means to be expressed or not expressed, things that have been expressed, those who express.

His recent exhibitions include "Behavior as Nature" at Künstlerhaus Bethanien, Berlin (2019), "Representation and Light", Kagawa (2018), "Railroad Siding 2017" at an ex-supply center of school meals in Tokorozawa, Saitama and "Setouchi Triennale" at the former Awashima Junior High School, Kagawa (2013).

The artist was born in 1976 in Mie, Japan, and has a post graduate degree from Tama Art University, Japan. 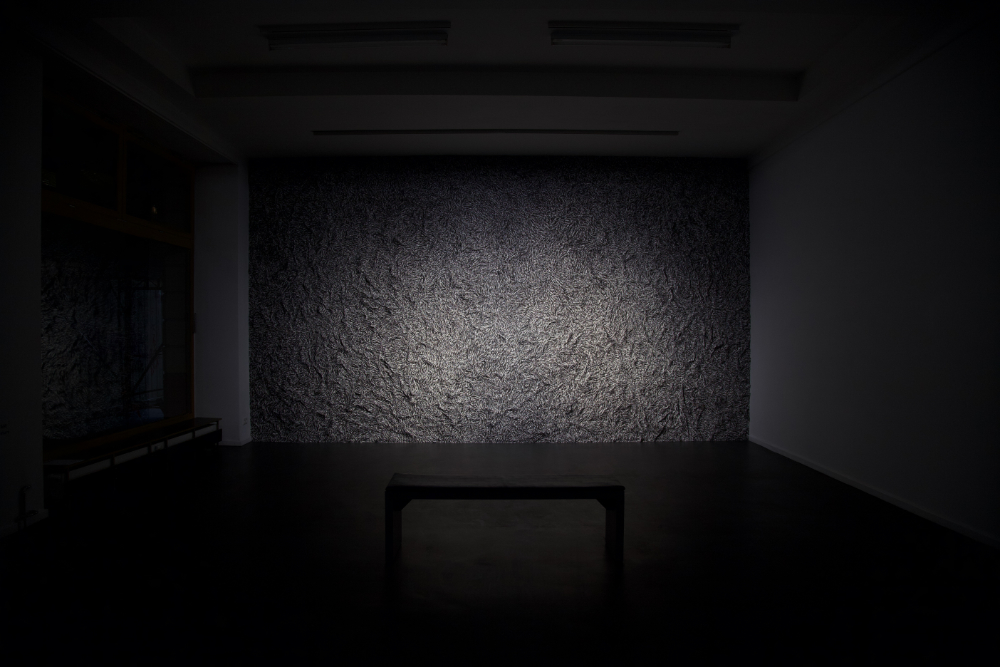 This drawing exist together with the space or an environment. The situation of this room changes the face by a light condition at all time. This space having big windows is face the street. So anybody can enjoy this artwork at all time that is not only gallery opening hours, but also night time and every morning too. Also this room works as the frame of this art work. A people can see the structure of this room clearly in the installation “Nostalgia”. That’s mean this drawing works as the frame of this room too.

This is the part of Hajime Mizutani Solo Exhibition “Behavior as Nature”. Generally human maybe can't behave as a nature. Especially, except a baby, we can't see anything as a nature. Our eyes always are together with a purpose or words. What is “to see” as a nature? This kind of Mizutani's series try to show the non-artificial scenery to a visitor. 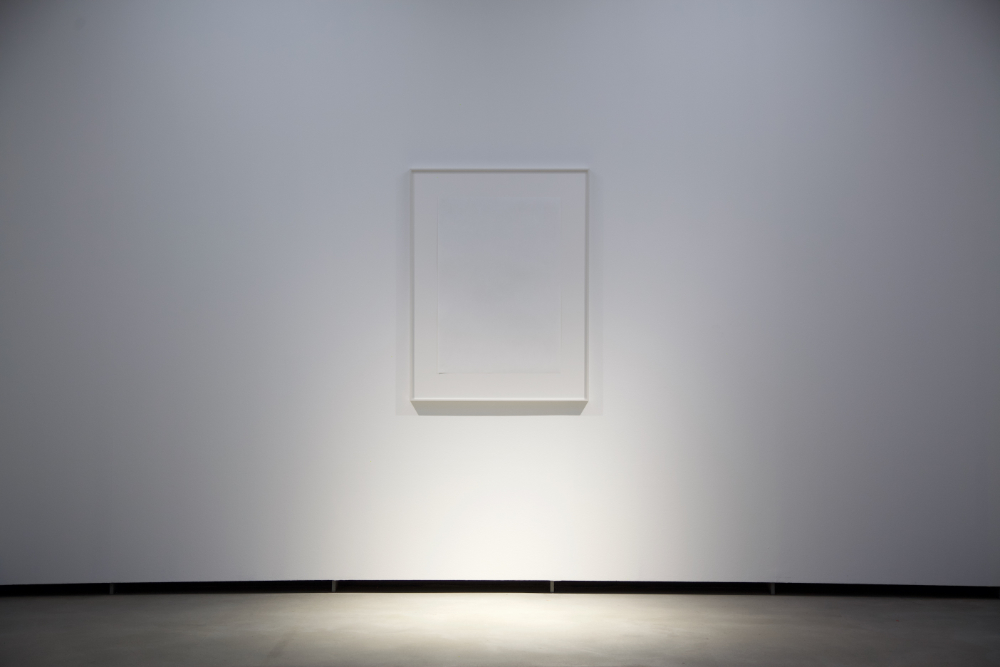 Photograph by Kanako Ishii
Between Visible and Invisible

Drawing of "Between Visible and Invisible" is made by very light-colored strokes of 4H pencil. Though artists who are participated in Artist-in-Residence Program of Künstlerhaus Bethanien stay in the White Cube (their studios), Through this installation, visitors of this installation are expected to notice that White Cube itself is beautiful and a material to think about an art, architecture, society, culture and so on enough without an artwork.

This installation try to show this very simple White Cube gallery itself together with a detail of this very light-colored drawing. Visitors seeing this installation “Between Visible and Invisible” might be able to feel and to think what a white cube are exposing. 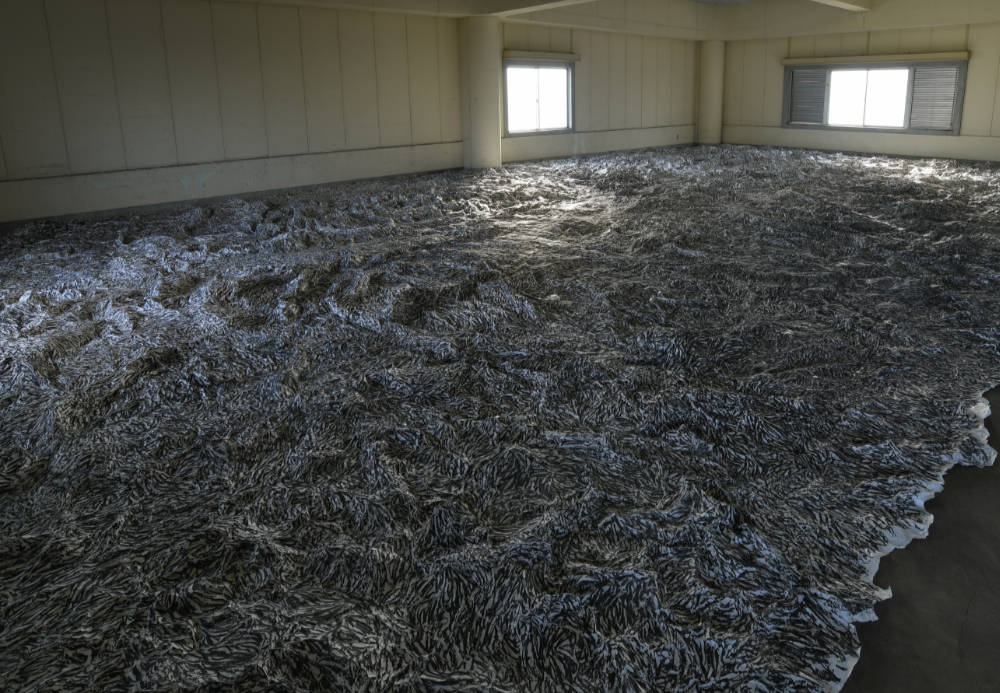 The sea scape (Setonaikai) is just outside of a window. Some people said “Is this the Tsunami of 11th March 2011?”. 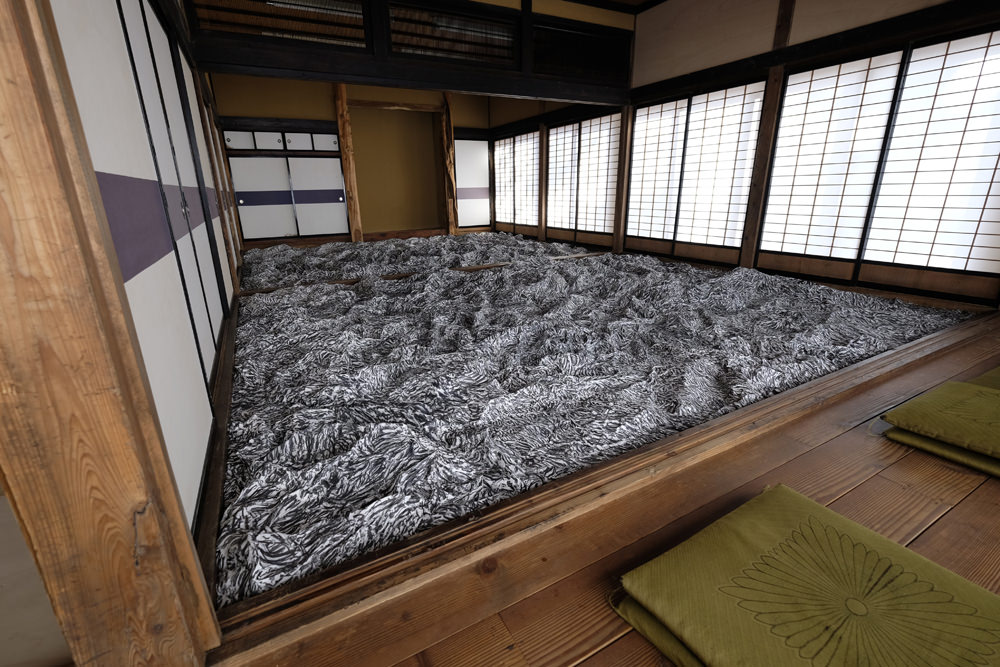 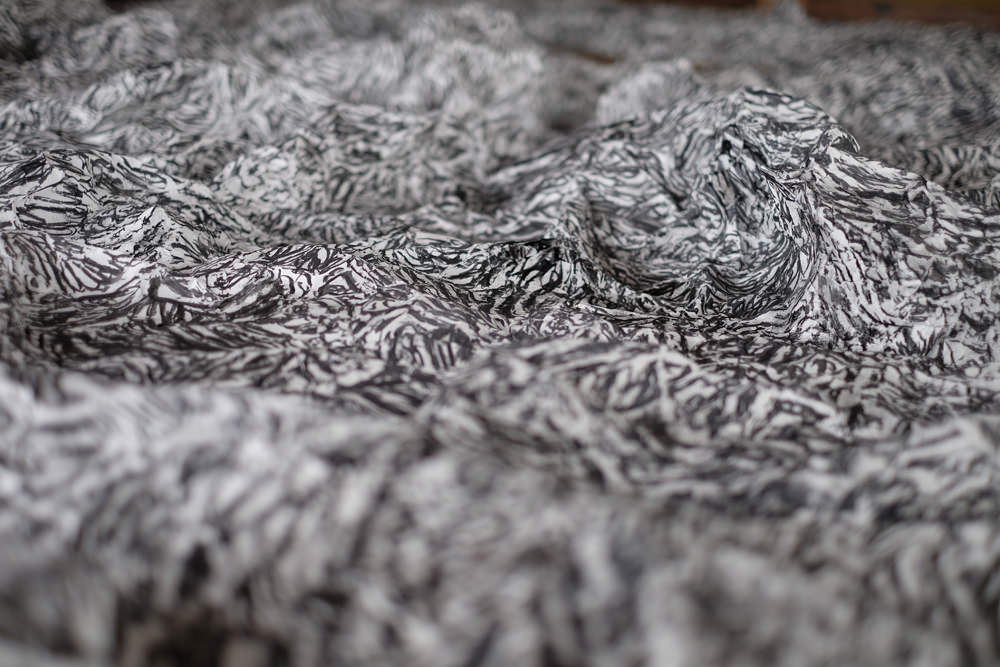 Photograph by H. Motoyama
View of The Blind Area

A traditional Japanese-style house that had been relocated to the top of Mt. Takagari was the venue of the drawing body artwork "View of the Blind Area", filling the space of an 18-tatami room. From this location you can see a vista of the whole Northern Japanese Alps, from Mount Hakuba in the north to Mount Jonen in the south.

Hajime Mizutani is a filtering device.


During the 70 days of his stay in Asahi AIR, he visited various historical sites, local museums, temples and shrines in Omachi city by bike, deepening his knowledge of the vegetation, geology, and water veins in the area to sift the environment through himself. By the accumulation of the drawings of this 'Hajime Mizutani filter', the work “View of the Blind area” appeared in an old traditional Japanese house at the top of Mount Takagari. He positions “View of the Blind area” as a part of the series “Drawing Body”. The somewhat sorcerous, charcoal-drawn pattern on a giant sheet of paper unfolds three-dimensionally to appear like an ocean or mountain range. Describing this “Drawing Body” as a method in between painting and sculpture, he explains that it could be an electrocardiogram of his mental and physical condition and the surrounding environment.There is no specific or individual message, but as a result of the whole body of action and perception sifted through the ‘Hajime Mizutani filter’, his art is 'expressed'.

[HYOGEN] [Express/Expression]
[1] the act of saying internal, psychological and subjective thoughts or emotions in external and objective form. or, the resulting display of those thoughts: facial expression, gestures, icons, and language. Especially artistic representation such as literature, music, painting and sculpture.
[2] to be shown, and to show, on the surface.

In the broader sense, an ‘expression’ is a general act, including various things such as a letter to someone, a smile on a child’s face, a new year’s resolution, and so on and so forth. We express not only to others, but also to our future selves, and in so doing we recognize ourselves anew and learn about our environment.
To live is always a repetition of experiencing and expressing, and the 'Hajime Mizutani filter' is well aware of that fact. That is the very reason he is determined to never stop expressing, and through that his work's purity increases. 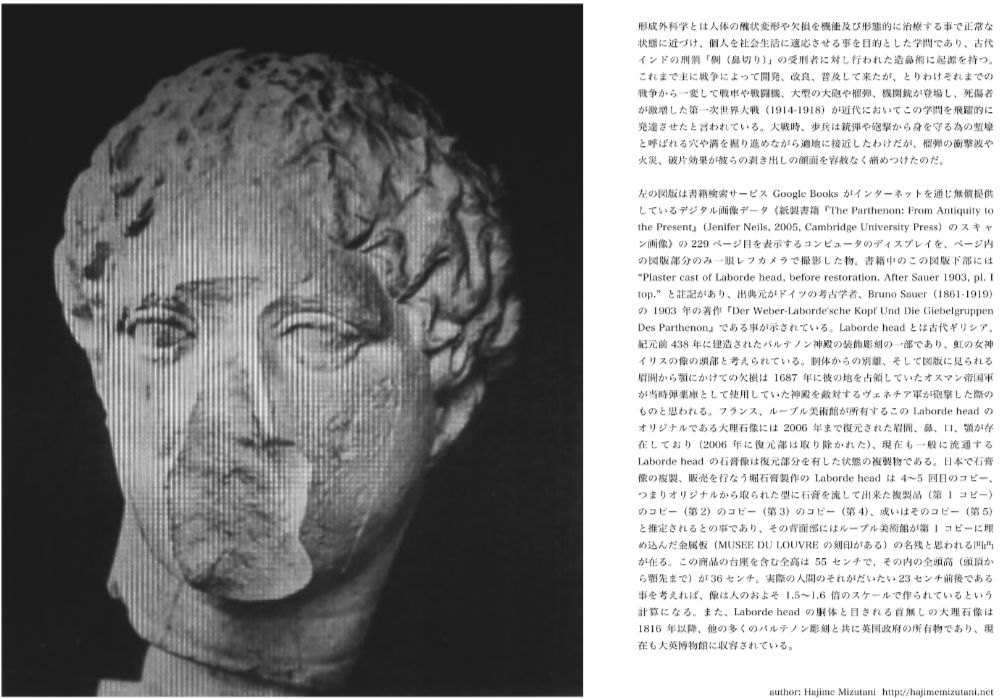 Real Image of The Ghost

The art work made by a photo and the text that is written about a contrast between the history about Laborde Head (part of sculpture of the Parthenon stands) and a plastic surgery. Both those histories were together with a war. Though so many plaster figures of Laborde Head are in the world today, they have a nose repaired. Actually the fake nose were removed from the model of Laborde Head in Musée du Louvre about 10 years ago. Of course we can see the Laborde Head's nose in art supply shops (in Japan) today too. 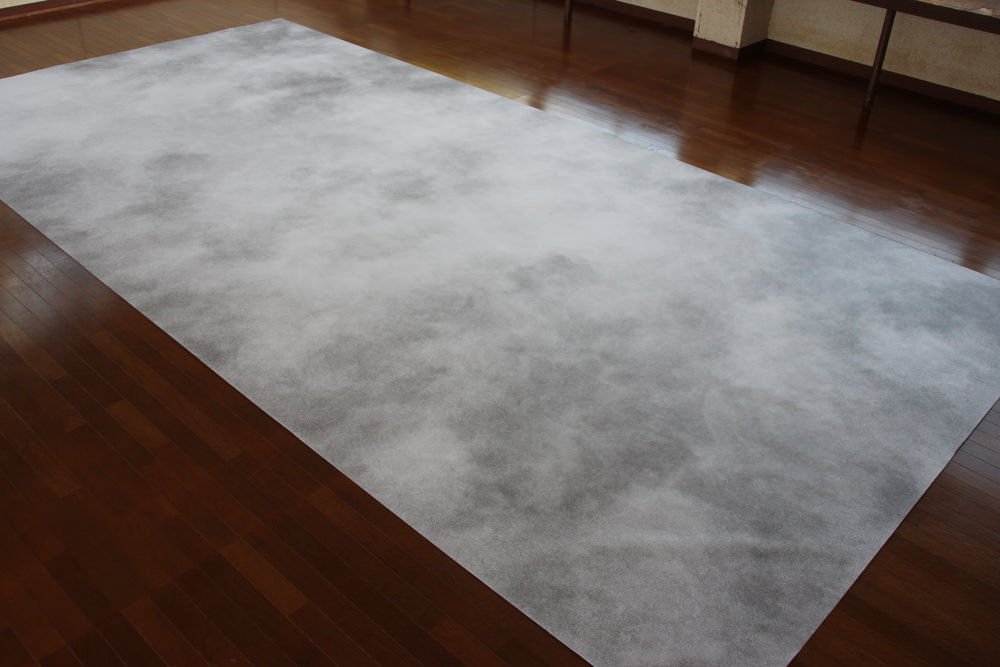 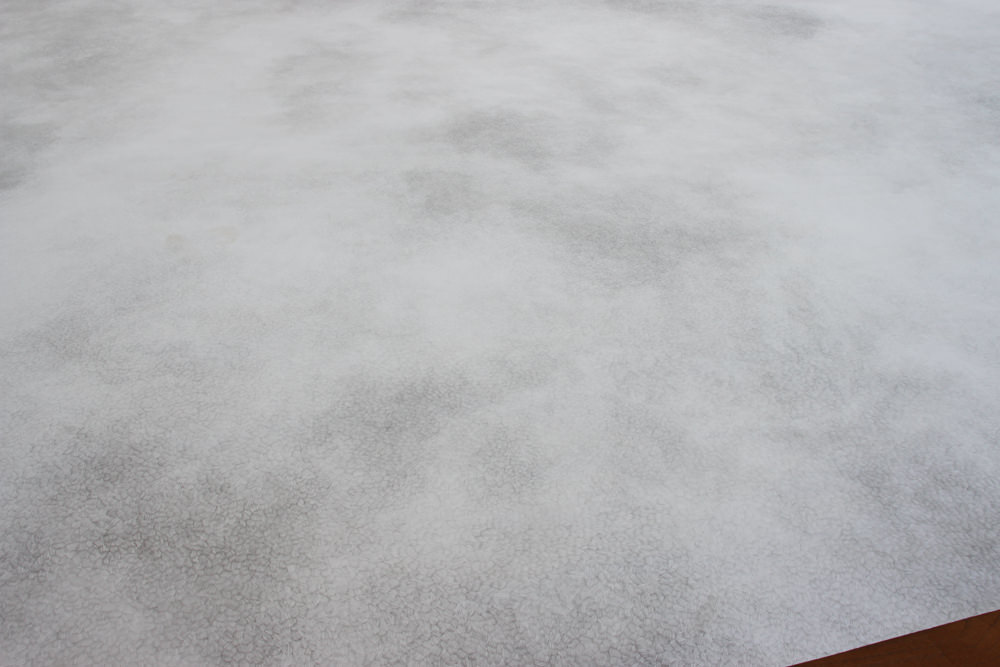 Overhead the clouds
Look to me like rippling waves;
Were the fishers here,
‘Which is sea, and which is sky?’
I would ask, and they’d reply. 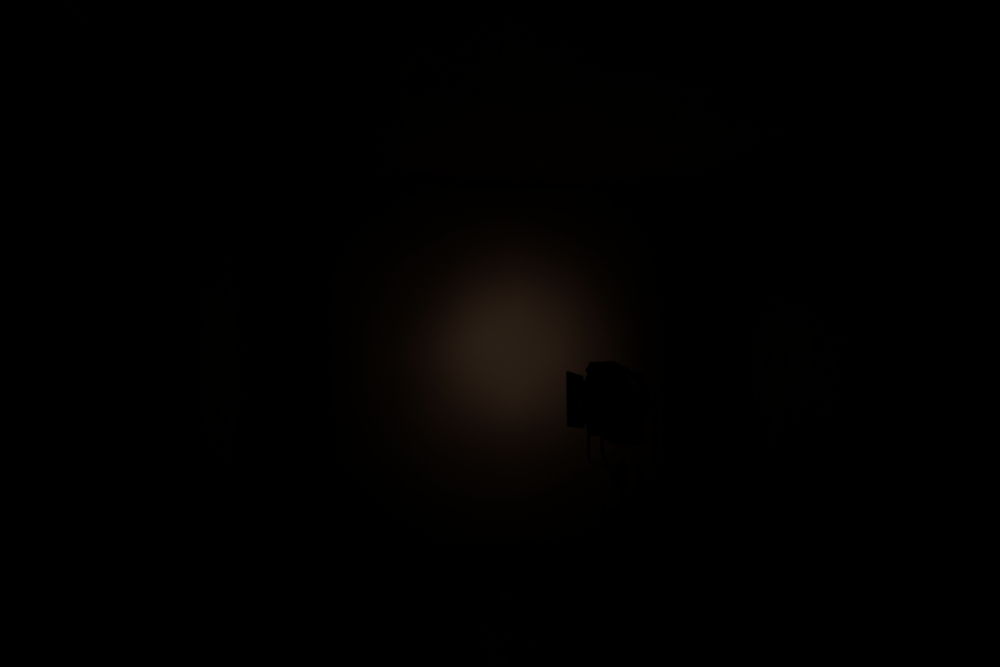 This is a work that experiences extremely small light in a totally dark soundproof room. Nothing can be seen without exposing the eyes to darkness for at least 15 minutes. Viewers come and go between "visible" and “invisible”. 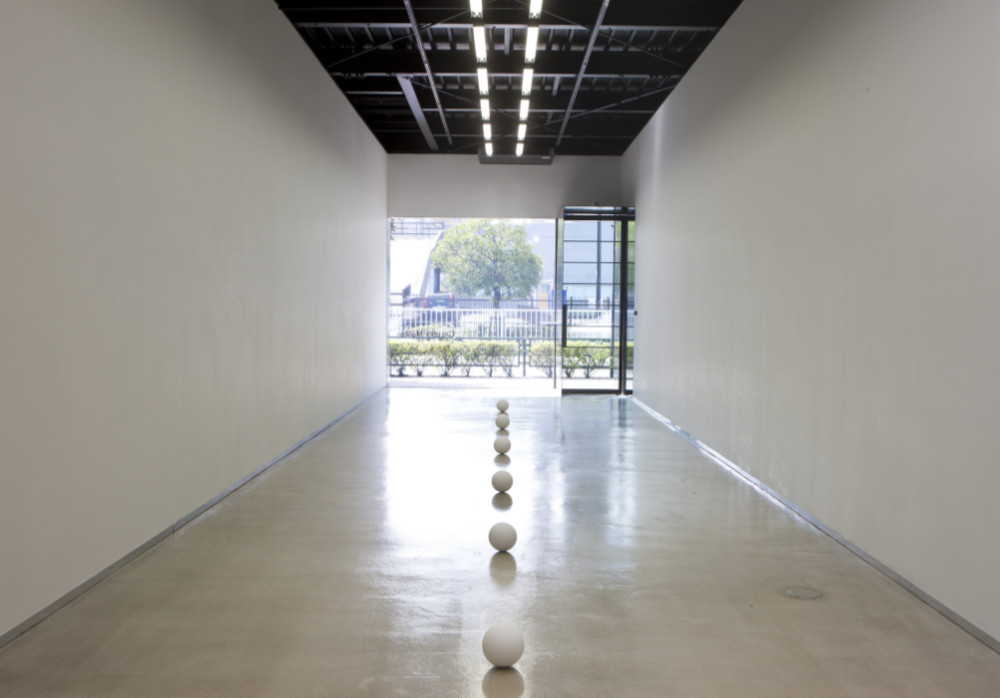 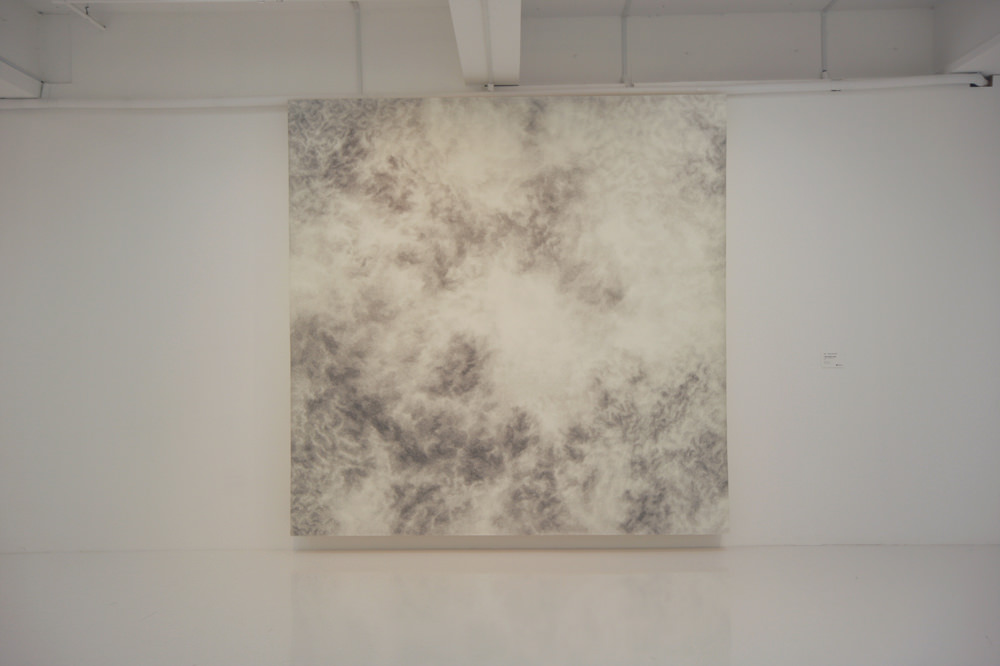 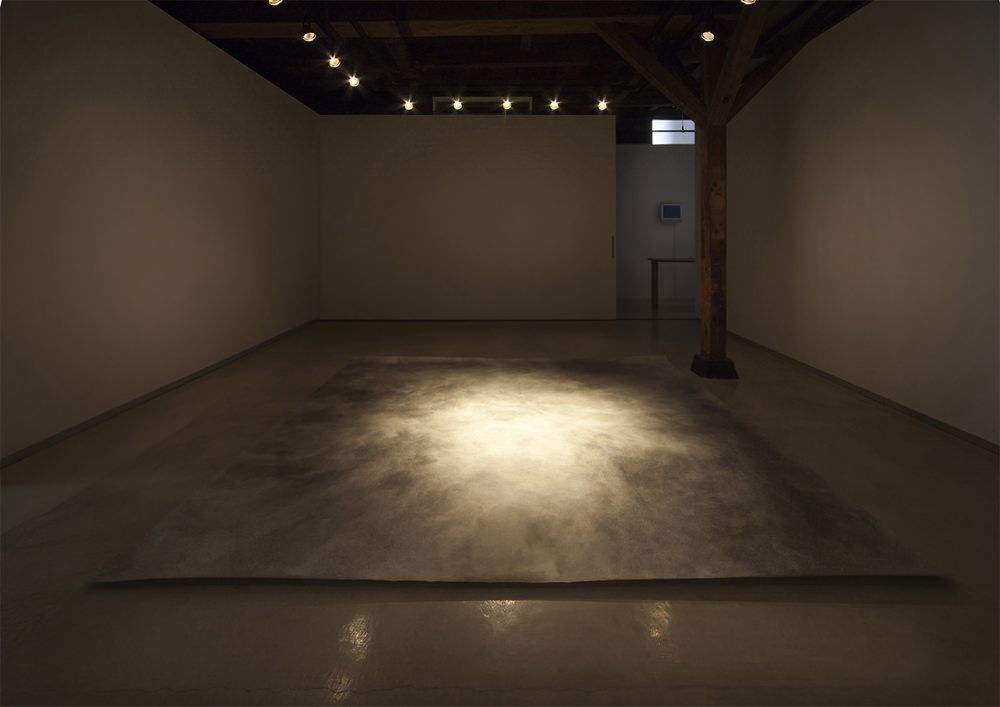 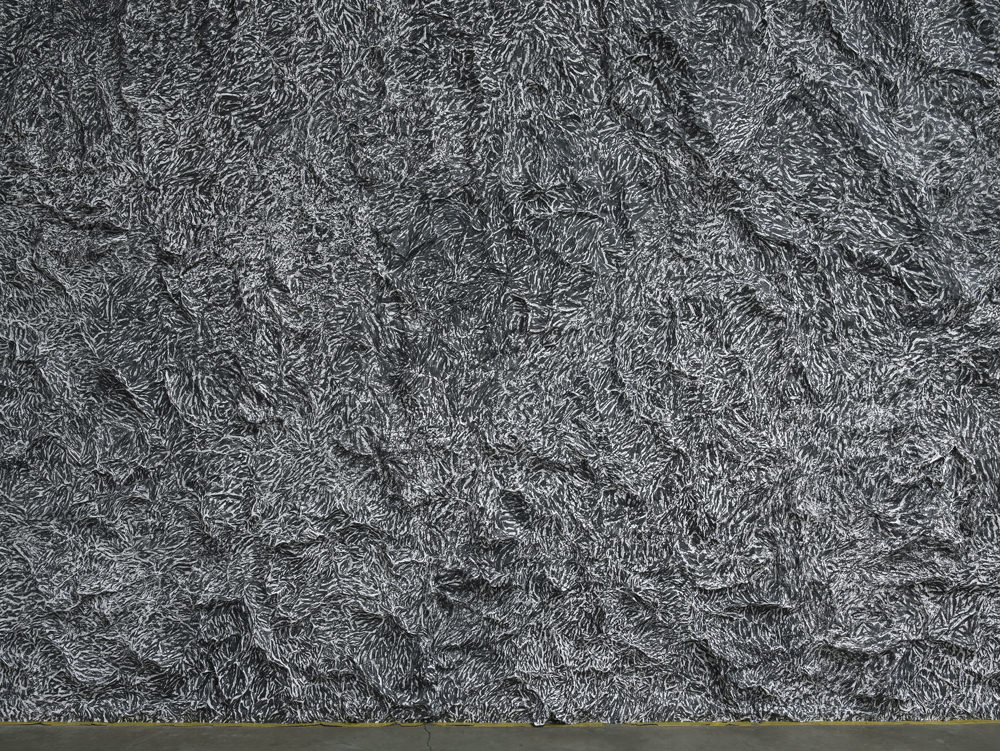 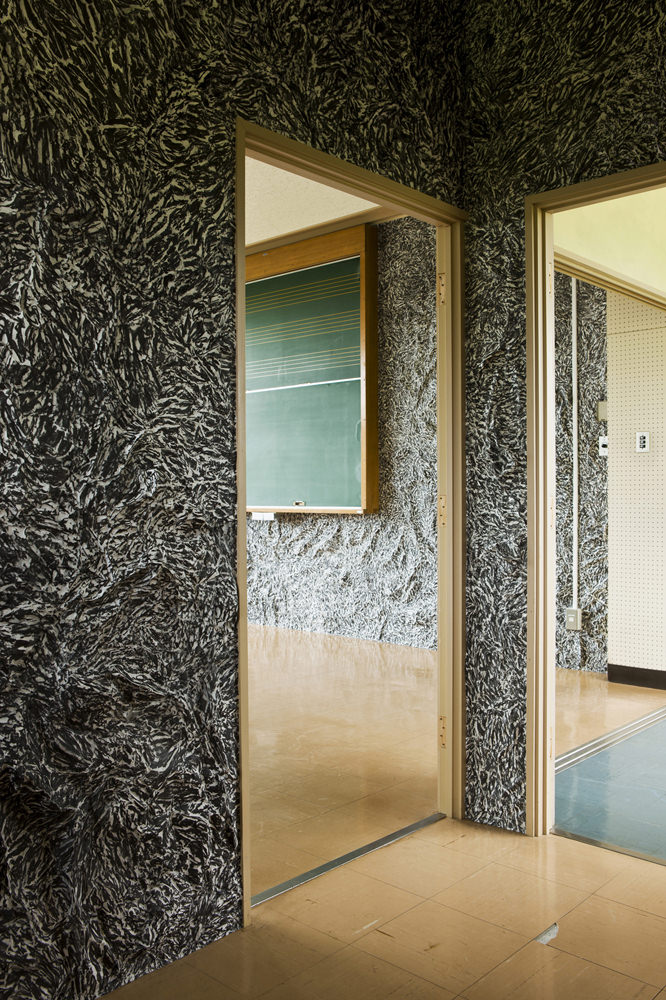 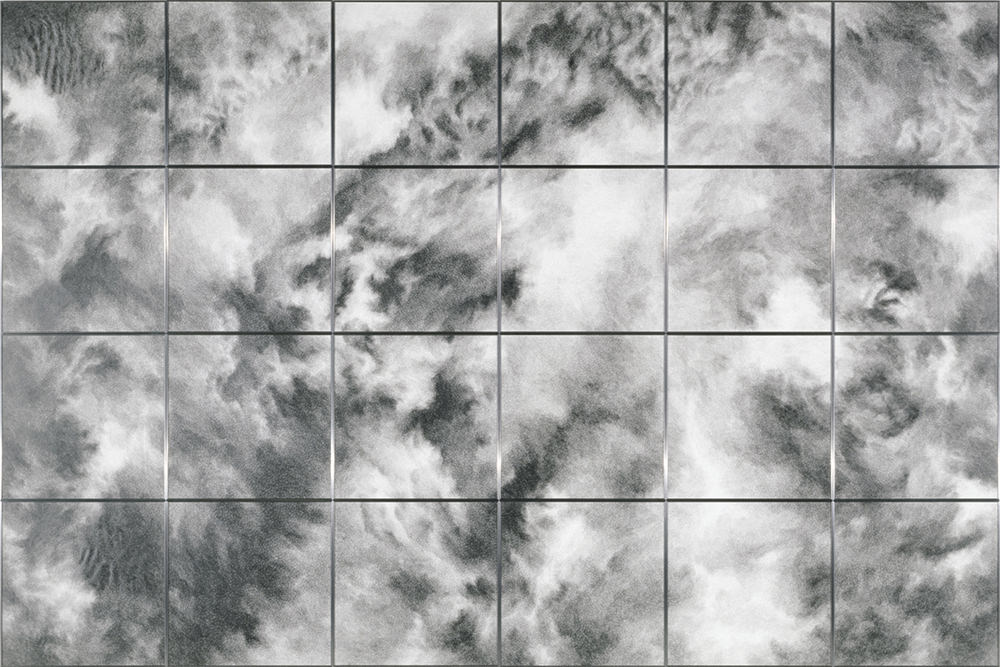 Very short lines are accumulated on white paper. Delicate gradations are added and the lines overlap and pile up, eventually filling up the square sheet. When one piece of paper is full, the next is added and these line-filled units are linked until there are 24 frames. The lines proliferate as if propelled by centrifugal force, and the completed work looks like part of a larger picture that continues to expand infinitely. The individual lines that make up the proliferating units are controlled, however, and not subject to impulse or inertia. They emerge from the artist's confrontation with the world. They do not depend on individual experience or memory but are laid down on the white paper as self-disciplined entitities. The total accumulation of these lines, however, creates an overall image of chaotic, turbulent, swirling forms of energy, making quite a different impression than the parts seen in isolation. It arouses a myriad of associations in the mind of the viewer.
Mizutani has been making pictures like this with short overlapping lines with pencil and charcoal on white paper for the last few years. His pictures are developed through repetition of the very basic act of drawing lines. A sense of restrained force and high tension produces an expressive and dynamic whole. The fertile imagery emerges from interaction between order and chaos, control and expressiveness. As viewers change position, they are able to capture glimpses of the layered structure here and there in the pictorial space, revealing the artist's creative impulse and how he went about forming the work. 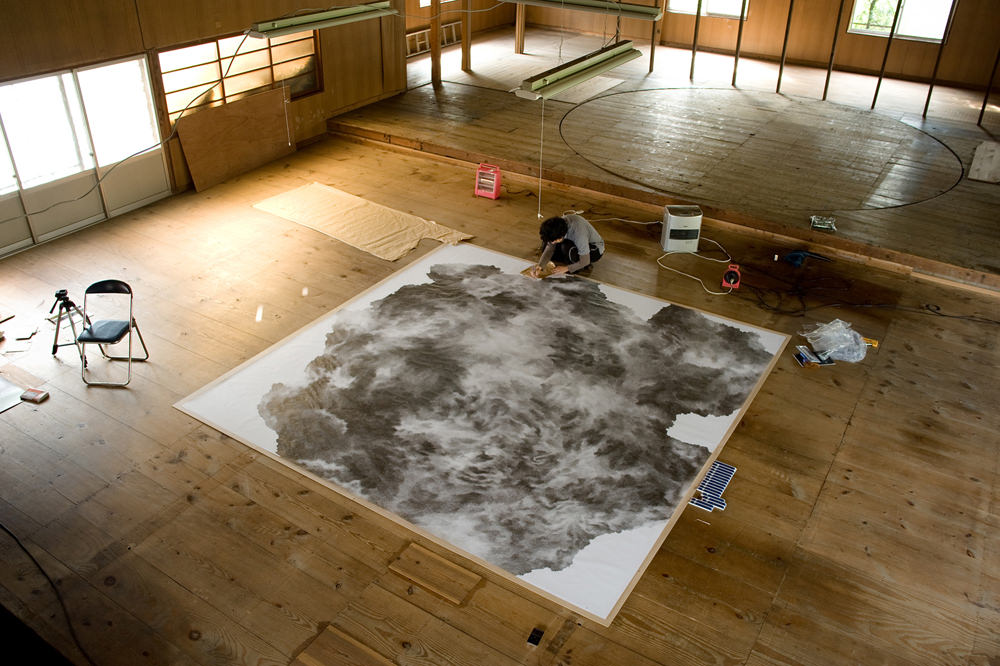 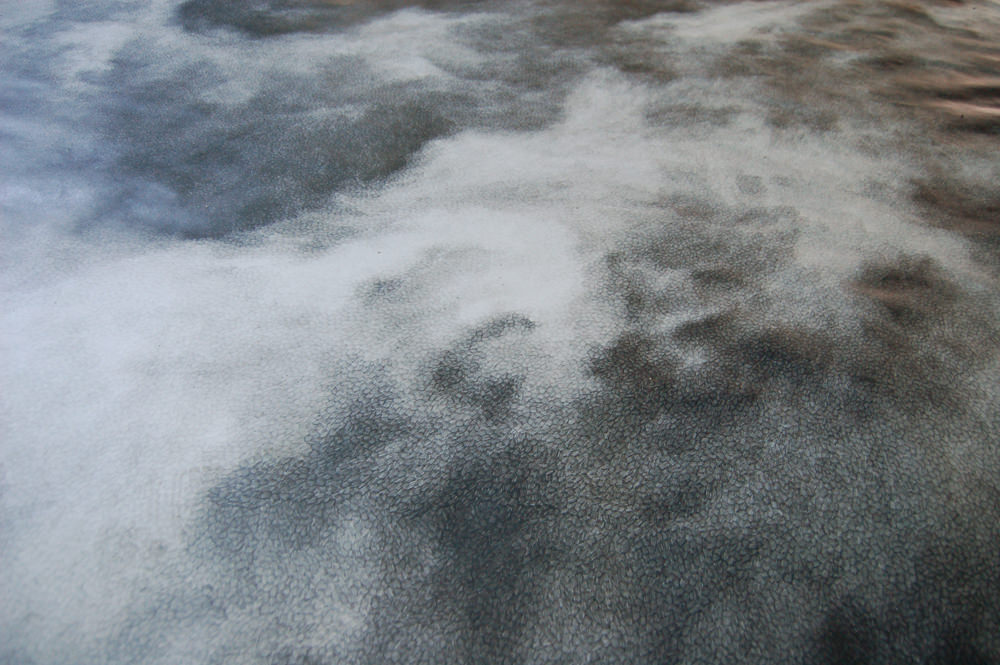 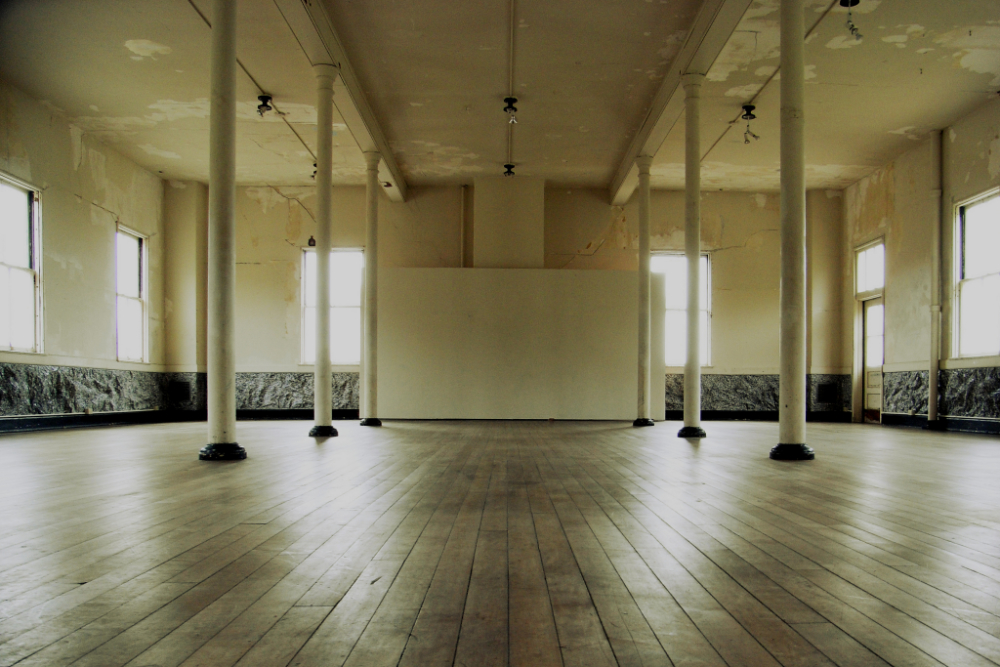 
He was Looking at The Forest 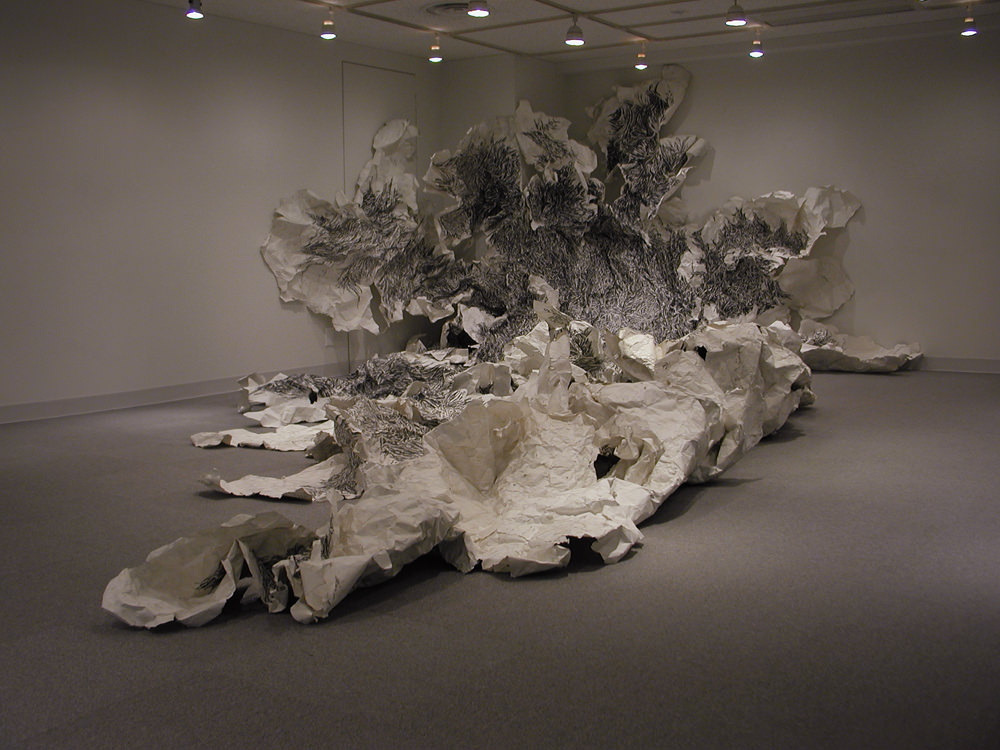 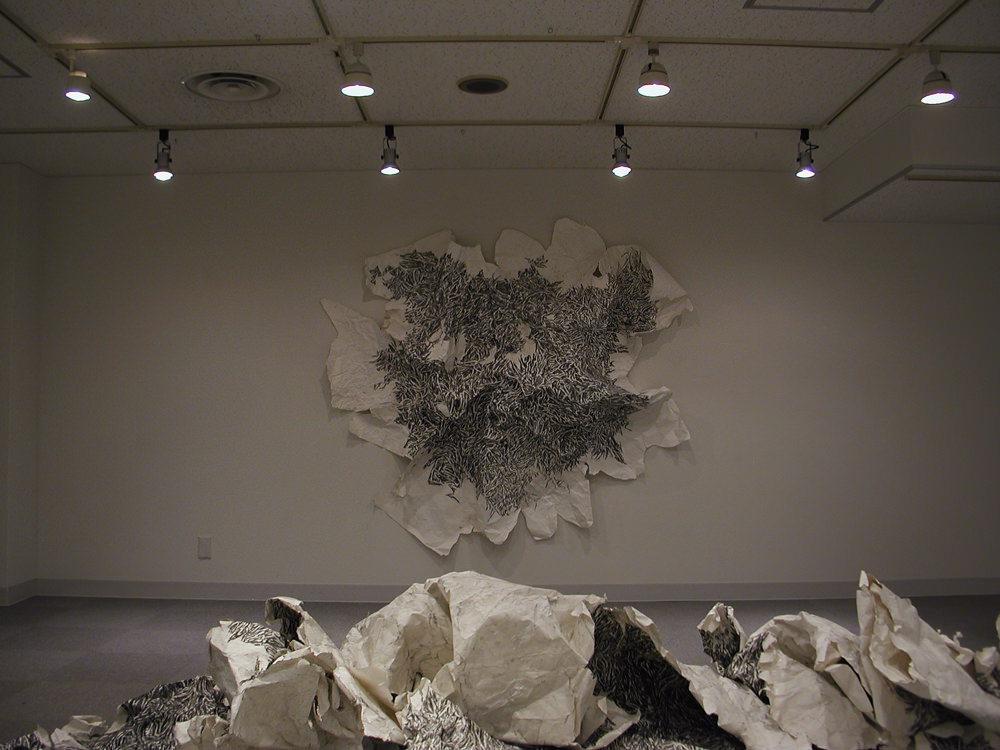 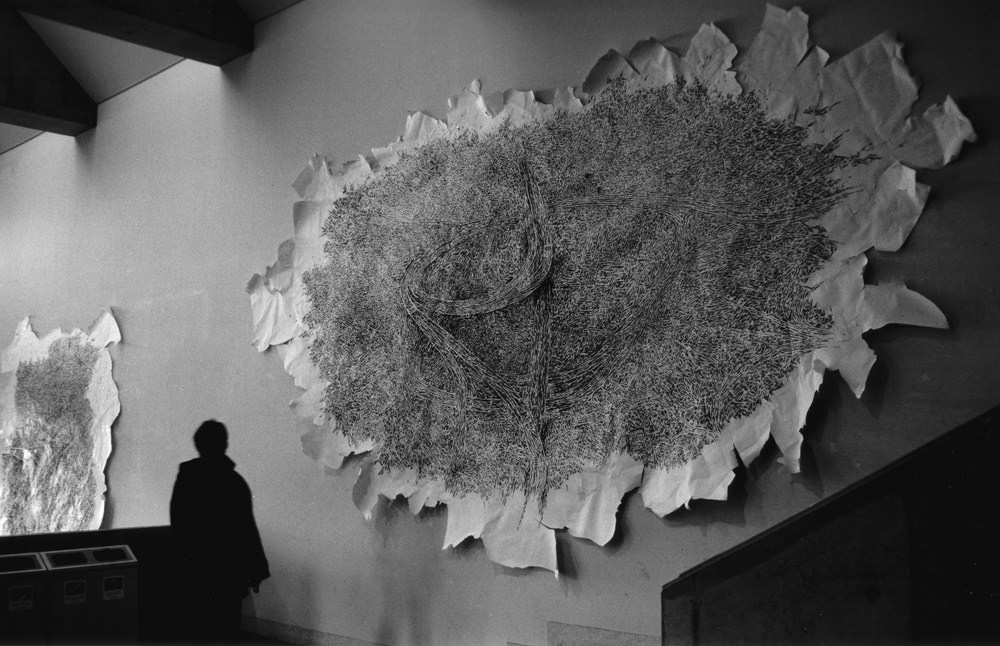 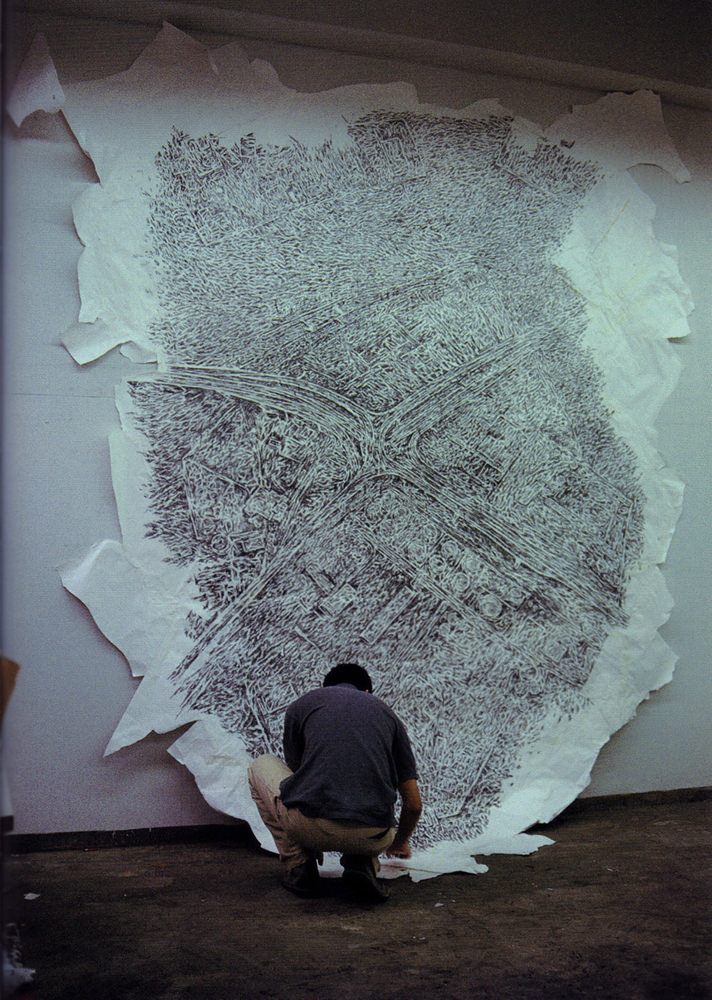 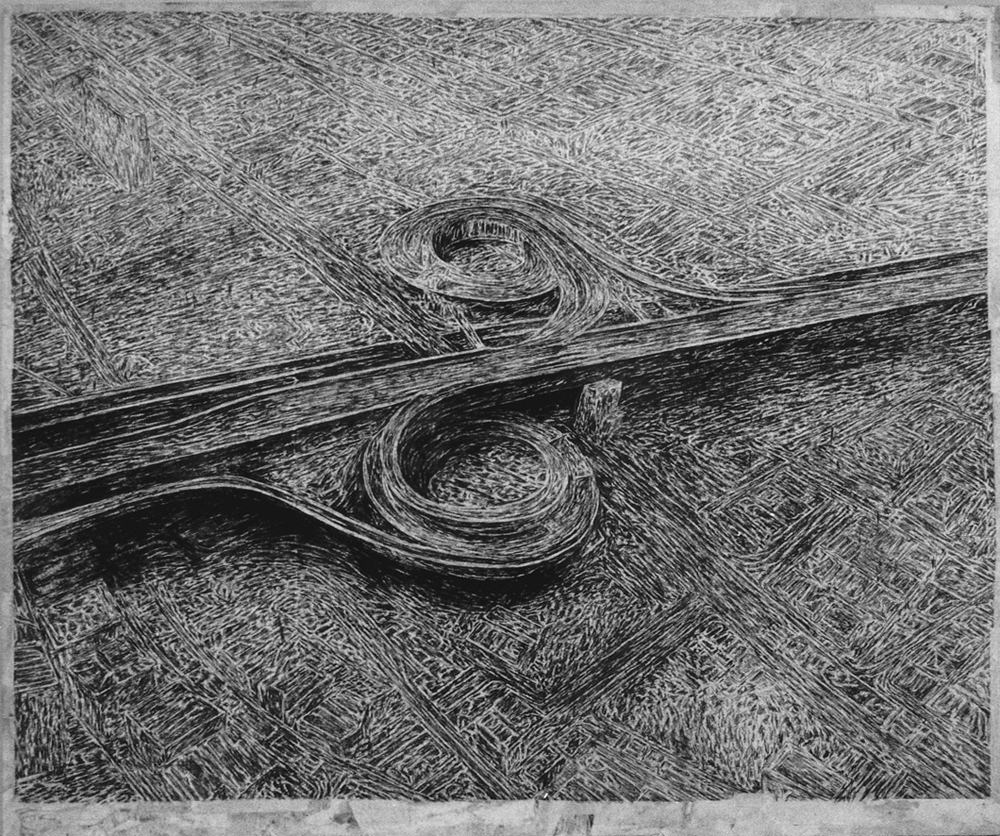 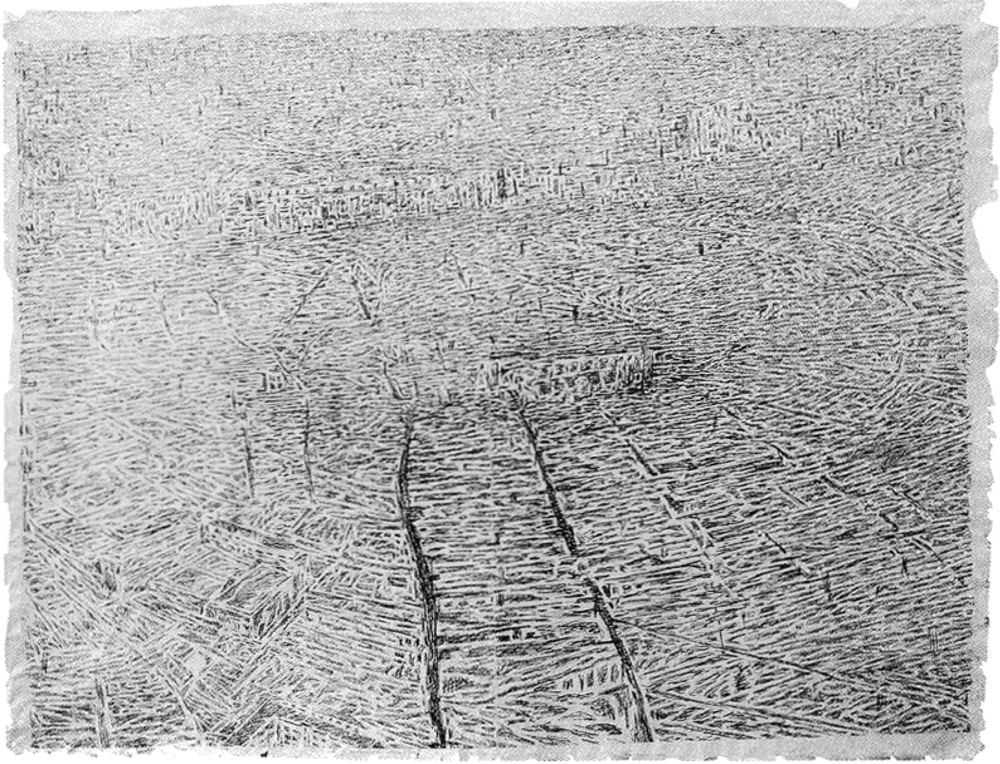 'Railroad Siding' is an exhibition that Hajime Mizutani is one of the member of steering committee.

'Violence and Universe' is an exhibition which was curated by Hajime Mizutani in 2011.

'40×40' is an exhibition which was curated by 'Ant's eye' that is a curation team include Hajime Mizutani.